It seems hard to imagine, but six months ago, we’d only just booked a room for our first meeting. Since then, a lot has happened, and as a movement, both locally and nationally, we’ve grown tremendously. What started as 40 people in a room has become hundreds taking action in the streets. As we look back over 6 months of action, here’s to an amazing 2014! 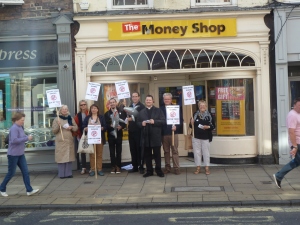 We took on Loan Sharks in September

It all began with the People’s Assembly Against Austerity on June 22nd. Moments after we’d left, a group of us from York had a quick discussion, picked a date and set about making a local meeting happen. On Wednesday July 17th, 40 people turned out to set York People’s Assembly in motion, laying the foundations for a broad coalition organising for a more just and democratic society.

September saw us taking on local Payday Loan Sharks as part of a national People’s Assembly event. The government has since made a new way for Loan Sharks to be held to account for their high interest fees. Later that month, we worked alongside York TUC to take two full coaches to the Save Our NHS demonstration in Manchester. 60,000 marched outside the Conservative Conference, delivering a message against the theft of a great public service to those responsible.

In October we welcomed Vince Cable to York, with local PCS Union rep Graham Bowers delivering a letter calling for his civil service department to remain publically owned and UK-based. Later that month, we supported PCS members at Defra in the first of several recent strike actions.

The highlight of October, however, was the York People’s Assembly conference. 100 took part in debates and listened to local socially-conscious acts in a day of activities. Debates ranged from scapegoating of the vulnerable to the realities of austerity here and around the world.

Many of us will remember the 5th November 2013 for years to come. Our beautiful Bonfire of Austerity atop the dormant Parliament Street Fountain drew the attention of hundreds of passers-by, as we gathered messages condemning the governments cuts agenda. Then we rounded out the day with a teatime rally.

November also saw the first strikes in both the University staff and Firefighters disputes, with Assembly members and radical caterers Food Not Bombs delivering food to the picket lines.

Anger amongst students at the passing of student loans to commercial banks has been growing steadily. In November, York students took part in a day of action organised by the Student Assembly Against Austerity, and in December, students and staff from York University and York College marched in to St Helen’s Square for a loud and passionate rally to defend education. Later, University of York students secured a partial victory over their institution by securing 50% of funds needed to maintain the scholarship program in the face of government cuts.

In December we turned our attention to the bedroom tax, as local campaign York’s Housing Crisis has secured a council debate on their ‘No Evictions’ petition. Dozens protested outside the council, and Assembly member Chris Fuller delivered a stirring speech before councillors, making them visibly uncomfortable about their role in forthcoming evictions of tenants. We also toasted another victory: an increase in mental health service funding in the Vale of York for next year. 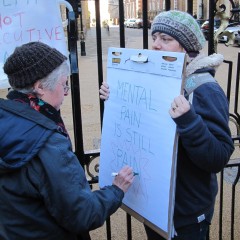 From national success against loansharks, to local success on Mental Health and student scholarship funding, its been a great six months. We’ve supported strikes, taught economics, responded to major stories and created a few stirs of our own. All this wouldn’t be possible without the time, skills and money of ordinary people like you. We’re relaunching for 2014 with a meal, speakers and Decision Meeting on January 13th at Friend’s Meeting House. Here’s to an amazing 2014!

Can you help cover the costs of building a movement against injustice and greed? Find out how to donate to York People’s Assembly here.