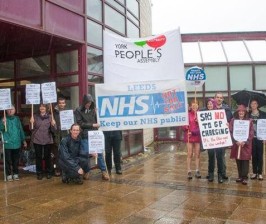 The BMA’s conference in York today was met with protests against proposals to charge patients for appointments. Many delegates voiced their concerns, too, at the risk charges would pose to our nation’s health. Fears were voiced about patients putting off trips to the doctor until conditions have worsened, costing more in the long term. And the need to tackle tax dodging was raised as a response to questions about a lack of money.

Not only did local media cover the protest, but several delegates wanted photos for newsletters that go to local surgeries. GP magazine was also keen to cover the action. One common suggestion from delegates was that the motion was merely meant to start a debate about greater funding. But those taking part in the protest were clear that this was a dangerous tactic to use whilst the health industry circles the NHS like vultures looking for any possible way to make money. It’s been suggested that the bureaucracy could cost more than the charges would make.

Results are now in from the debate, and the proposal was defeated by 224 votes to 59. Whilst its a welcome and emphatic defeat, 20% support for charging at a conference that represents 40,000 GPs is a worry. Many thanks to Dr David Wrigley for the results – twitter reports that he used his speech to describe the motion as “Toxic” and state “There is no financial crisis. Politicians are lying, softening up for privatisation”.

Want to find out about our future events? Sign up for our email updates here.